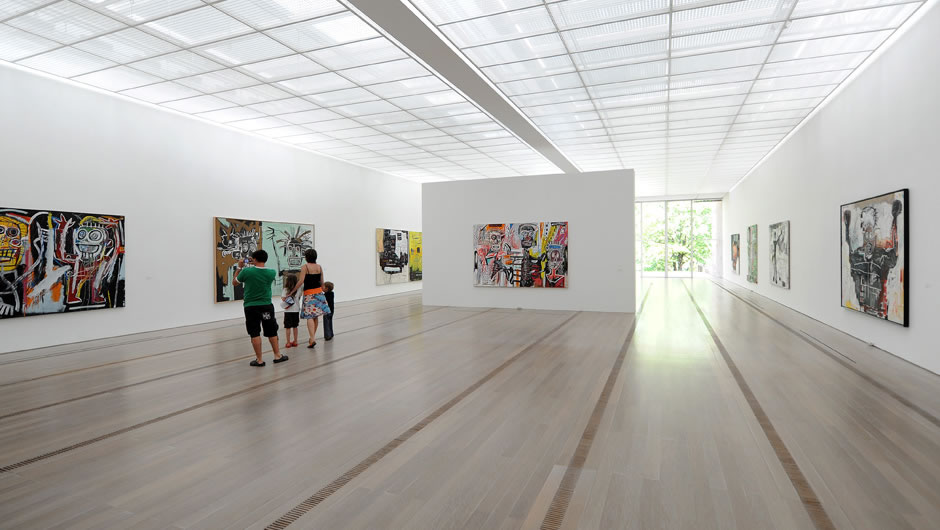 During his fifty years as an art dealer Ernst Beyeler was constantly collecting art. In time, this required him to make provisions for the future of his pictures and sculptures. The most obvious solution would have been to bequest the works to the Kunstmuseum Basel. However, when the government of the canton Basel City put forward suggestions for a new home for the collection, it soon became apparent that none of these locations could do justice to the works of art.
So the foundation was launched and with it came the idea of building a museum specifically to house the collection. Ernst Beyeler was excited by the vision of combining groups of works by major artists from the last hundred years with sculptures from Africa and Oceania in a compatible setting. However, this setting had yet to be created. Having been highly impressed by the work of Renzo Piano, who designed the Centre Pompidou in Paris and the Menil Collection in Houston, he commissioned the acclaimed Italian architect without competition to design the new museum.

The beautiful grounds of the Villa Berower estate, provided by the municipality of Riehen, offered ideal surroundings for a museum intended as a home for Monet’s Water Lilies. The idea of creating an exciting synthesis of nature, daylight and art could not have met with more favourable conditions. There was something altogether painterly about the meadow parkland with its richly varied vegetation. Ernst Beyeler and Renzo Piano engaged in an extensive exchange of ideas throughout the entire process of planning and building the museum. From the outset Renzo Piano proposed building a museum tract that would consist of three sections integrated into the terrain in a series of steps. A section was added along the building’s eastern side – like the side deck of an aircraft carrier – which also screened the museum from the main road. To the west, an adjoining winter garden opens up a view of the countryside as it sweeps down towards the river Wiese at the foot of the Tüllinger Hill.

Renzo Piano paid considerable attention to the design of the roof, seeking ways of allowing the changing phases of daylight to be experienced inside the galleries while abiding by conservation requirements. The building was designed to radiate simplicity while maintaining harmony with its setting. Ernst Beyeler’s wish that visitors should be able to experience the museum and its collection on a single floor without the need to climb stairs, and that a pond be created outside the south-facing façade, was fulfilled by sinking the entire complex to a lower level in the ground. This draws the museum into closer communion with the landscape as well as lending it a more intimate character.